Saudi Arabia will rely entirely on wheat imports within a year, and Africa is on the top of the agenda as an overseas investment location

Saudi Arabia’s newly appointed Minister of Agriculture Waleed Al-Kuraiji has declared that the Kingdom will cease all wheat farming and rely entirely on imported wheat from 2016, citing both the pressure of water resources and a shift towards overseas food investment.

Speaking at the speaking at the International Grains Forum, he detailed that the Kingdom’s wheat import increased from 300,000 in 2008 to three million tonnes in 2014, placing the country sixth on the rankings of the top wheat-importing countries that year.

The Kingdom has been undergoing a strategic move for the past seven years ... to head to international markets for products that are water consuming.

The Kingdom itself produced over 2 million tons of wheat in 2008, but the programme to encourage self-sufficiency in this area has now been rejected due to its negative affect on the country’s limited supply in underground aquifers and the cost of desalination.

Since 2008, the Kingdom has been steadily reducing its production of wheat at an annual rate of 12.5%.

“The Kingdom has been undergoing a strategic move for the past seven years to conserve water, therefore we head to international markets to import products that are water consuming, on top of which is wheat,” Al-Kuraji explained.

Kenya's economy is booming and FDI is the key

Overall, Saudi Arabia imports around 80% of its food requirements from foreign countries while the remaining 20% is produced locally, according to a World Bank report last April.

Within the context of comments by Alan Tracy, president of the US Wheat Association, who called on the establishment of a Global Wheat Food Security Initiative, other delegates also strongly emphasised the need for the whole world to turn to Africa for food security.

In reality, this process is already well underway, particularly in countries such as the Sudan, where Saudis been actively encouraged to invest by the Custodian of the Two Holy Mosques in a drive focused on five major products: namely wheat, barley, corn, beets, and soybeans. 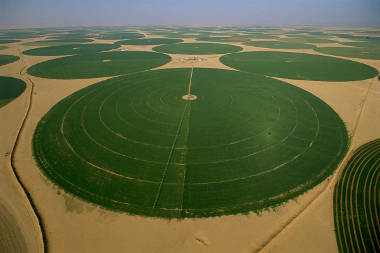 In August, Ahmed Shawur, the secretary general of Sudan’s Higher Council of Investment (HCI), anticipated that Saudi investments in the country would exceed $13bn within months.

Saudi investments in Sudan poised to pass $13bn within months

Across the Arab world, there is now an estimated $40bn shortfall in food production, and in the context of Sudan, Saudi interests are already responsible for some of the largest single investments into Sudan’s agricultural sector, including into Kenana Sugar Company (KSC).

Globally, the Kingdom of Saudi Arabia and the UAE are two of the top investors into agriculture on the continent.

In a related example, the UAE’s Al Dahra Agriculture is similarly looking to produce 300,000 tonnes of wheat in Toshka, a southern region of Egypt’s desert, by the year 2016, in a project in the planning since at least 2008 using 43,000 hectares of land using water from the High Aswan Dam.

In a positive case of otherwise unworked land being made viable, Al Dahra has already invested $105m on infrastructure for the project, including into a 50km canal from the dam, and anticipates a total investment of some $500m and will supply wheat to the local market.

Hans van der Beek, agricultural counsellor to the GCC Ministry of Economic Affairs, concurred that Africa has the resources while noting that investors seeking Africa need to listen to farmers, ensure that there will be no displacement and that locals would benefit.

Ethiopia has meanwhile also captured the attention of Saudi investors owing to its high soil fertility, the amenability of its climate towards the cultivation of a diverse range of crops, and the comparative abundance of its water supply as the source of the Blue Nile.

Minister Al-Kuraiji noted that in addition to overseas investment plans, both the private and public sectors in Saudi Arabia were now working on a project to increase the stock of wheat in the country to an entire year’s supply, up from only six months, to provide a buffer to fluctuating wheat prices.

Nigerian REITs market is underdeveloped with only three established and with a combined market capitalisation...

Saudi Arabia will rely entirely on wheat imports within a year, and Africa is on...

Dubai-based private equity investor Abraaj Group debuts in Algeria, targeting a sector where it has...

The south-western Nigerian state has been in discussions with potential partners at the ADBG in...

ADBG’s annual meetings are underway with a focus on accelerating industrialisation and investing in youth.

Africa needs to develop its gas infrastructure, according to energy industry expert.