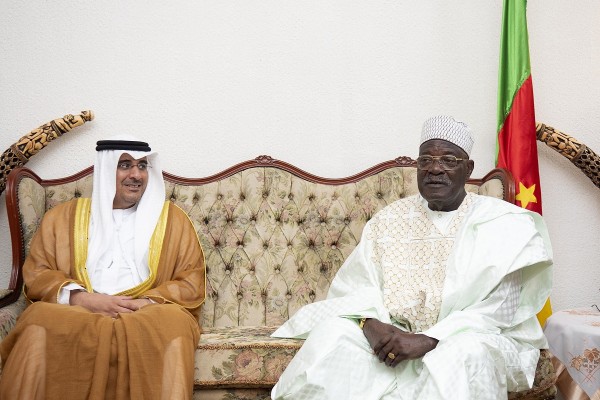 Fahad Obaid Mohammad Al Taffaq, UAE Ambassador to Nigeria and Non-Resident Ambassador to the Republic of Cameroon, has held meetings with a number of officials and businessmen in Cameroon, and discussed ways to strengthen cooperation with the Central African country in all fields.Al Taffaq visited the capital city Yaounde, and toured a number of institutions and bodies and attended several economic events and cultural activities.

He met with Cavaye Yeguie Djibril, House Speaker of National Assembly of Cameroon, and discussed the importance of ratification by the Cameroonian side of the agreement to avoid double taxation between the two friendly countries and the importance of signing economic agreements concerned with protecting investment and air transport.The two sides also explored means of enhancing cooperation in the legislative and parliamentary fields.Djibril, in turn, praised the prestigious position held by the UAE in all fields, expressing his desire to enhance bilateral cooperation and benefiting from the UAE’s pioneering government experience.The UAE ambassador also met with Njoya Zachariaou, Minister of State for Transport, and exchanged views on boosting cooperation between the UAE and Cameroon in the field of air transport, ports, and infrastructure.

In a meeting with Joseph Beti Assomo, Minister Delegate at the Presidency in charge of Defence, Al Taffaq explored a number of issues of mutual interest in the defence and security fields.The UAE envoy also met with Narcisse Mouelle Kombi, Minister of Sports and Physical Education, and Seidou Mbombo Njoya, Cameroon Football Federation, FECAFOOT, separately and discussed during the two meetings ways to foster sports cooperation between the two countries.Al Taffaq held several meetings with a number of senior businessmen in Cameroon during which he reviewed the most important elements of investment in the UAE to enhance trade exchange and investment flows between the two countries and the active role played by the private sector in this field.

On the cultural level, the UAE Ambassador visited the National Museum of Cameroon and met with its Director during a tour of its most important sections. Al Taffaq was briefed on the most important chronological periods in the history of Cameroon and a collection of antiques and historical photo exhibitions.Related article Foreign direct investment on the rise across MEA

Both GCC and Sub-Saharan Africa have shown a general increase in both project numbers and capital investment according The fDi Report 2019. The United…