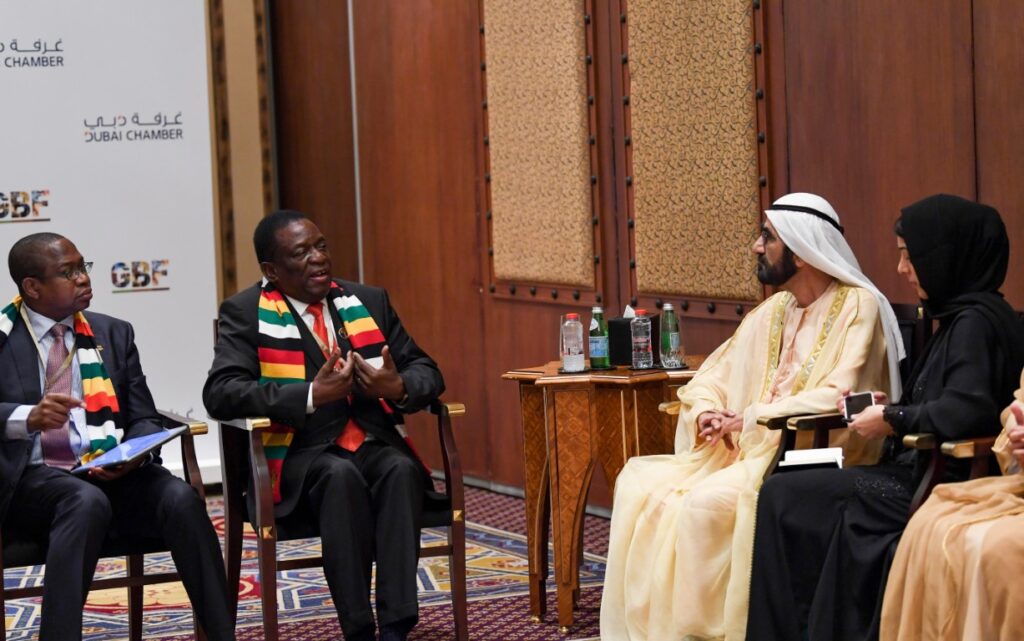 Zimbabwe’s President Emmerson Mnangagwa: The jump reflects the historical partnerships between Africa and the Arab world.

Zimbabwe-UAE bilateral trade has jumped 300 percent during the past three years and corresponding growth in overall ties reflect the historical partnership between Africa and the Arab world, said President of Zimbabwe Emmerson Mnangagwa during his three-day official visit to Dubai.

“The relations between Zimbabwe and the UAE are growing so fast in all sectors. Three years ago, our bilateral trade was around $US400 million [only], but it jumped in 2021 to US$1.6 billion, and the UAE has now become Zimbabwe’s second-largest trading partner,” he said.

This Monday, Mnangagwa met with His Highness Sheikh Mohammed bin Rashid Al Maktoum, Vice President and Prime Minister of the UAE and Ruler of Dubai, at the Expo 2020 Dubai where the two discussed advancing bilateral relations between the two states. When asked if the increasing trade between the countries represented a continuation of historic links between Southern Africa and the Gulf, Mnangagwa replied, “Yes, of course, this historical relationship has always been there between Africa and the Arab world,” he also pointed out that other southern African states enjoyed strong relationships with the UAE.

“What we lack is not resources. What we lack is technology. We lack skills. We lack investment. These things are found here [in the UAE],” said Mnangagwa. The talks centered around agriculture, mining and infrastructure development, and the promotion of science, technology and innovation in universities and healthcare sector, according to Mnangagwa.

Consul and commercial office to open in Dubai

Zimbabwe’s Foreign Affairs and International Trade Minister Ambassador Frederick Shava announced that the cabinet had given approval for the opening of a consul general’s office and accompanying commercial office in Dubai and that trade attaches would be sent shortly.

Shava went on to say that, “The whole point of the Expo is to expose the possibilities of doing business in Zimbabwe and the UAE, and between Zimbabwe and other participants in the Expo. As far as Zimbabwe is concerned, we have generated sufficient business with people who have interacted with us, to the tune of USD 1.6 billion.”

“When you look at our trading partners, this makes the UAE second only to South Africa as our largest trading partner,” he said. “With the establishment of the consul general’s office, the commercial office will stimulate the environment in which they do business. We are very delighted that the Cabinet has allowed us to establish that consulate in Dubai.”