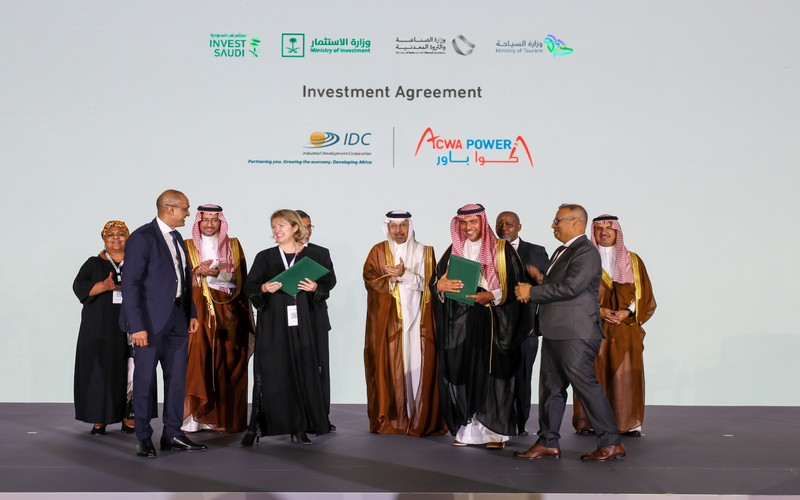 ACWA Power continues its push to develop green alternatives across the MENA region with key projects in Saudi Arabia and Oman.

ACWA Power, a leading Saudi developer, investor, and operator of power generation, water desalination and green hydrogen plants worldwide, and the Industrial Development Corporation of South Africa (IDC), a government-owned development finance institution, signed an extensive memorandum of understanding (MoU) on 20 October to explore a partnership in developing green hydrogen and its derivatives in South Africa.

South Africa has a net zero target for 2050 and plans to become a significant producer and exporter of green hydrogen and its derivatives. Accordingly, the government has mandated the IDC to lead the development and commercialization of the green hydrogen economy. The IDC, in partnership with the Green Hydrogen Panel, is in the process of finalizing the South African Green Hydrogen Commercialisation Strategy (GHCS).

Given ACWA Power’s experience in the South African renewable energy industry and in green hydrogen projects abroad, the company can play a meaningful role in supporting the objectives of the GHCS.

The partnership coincides with the state visit of South African President Cyril Ramaphosa to the Kingdom of Saudi Arabia. The agreement was digitally signed by Paddy Padmanathan, Vice Chairman and CEO of ACWA Power; Clive Turton, Chief Investment Officer of ACWA Power; Rian Coetzee, Head of Industry Planning and Project Development at the IDC; and Russell Wallace, Manager of Legal Services at IDC, with agreement copies exchanged at a gathering attended by executive dignitaries.

Although this is the first agreement of its kind between ACWA Power and the IDC, the parties have previously collaborated for equity in a renewable energy plant in South Africa. The potential value of this MoU is estimated at USD 10 billion. ACWA Power will function as the developer for green hydrogen and its derivatives in South Africa, with the IDC acting as co-developer and equity partner in the proposed projects.

With tangible renewable energy development commitments in South Africa already contributing to the country’s clean energy goals, the signing of the MoU with the IDC for the development of green hydrogen is a significant step towards further investing in diversifying the country’s energy mix and accelerating its green economy.

“As a company that is driving energy transition, ACWA Power is proud to work closely with the IDC, with whom we share a robust working history. We are delighted to take our collaboration further. I am confident that our expertise in developing mega-scale green hydrogen projects in other geographies will enable us to successfully create a new avenue of sustainable energy generation, one that will pave the path to further progress,” said Padmanathan.

ACWA Power has had a footprint in South Africa since 2016 and currently has two solar energy plants in the country, namely Bokpoort and Redstone. Both projects utilize concentrated solar power technology. With key projects in Saudi Arabia and Oman, the company is ramping up green hydrogen projects at scale in different locations globally.

Green hydrogen production and renewables investment have been on the up across the MENA region.