Morocco and the UAE to promote investment, economic and political ties 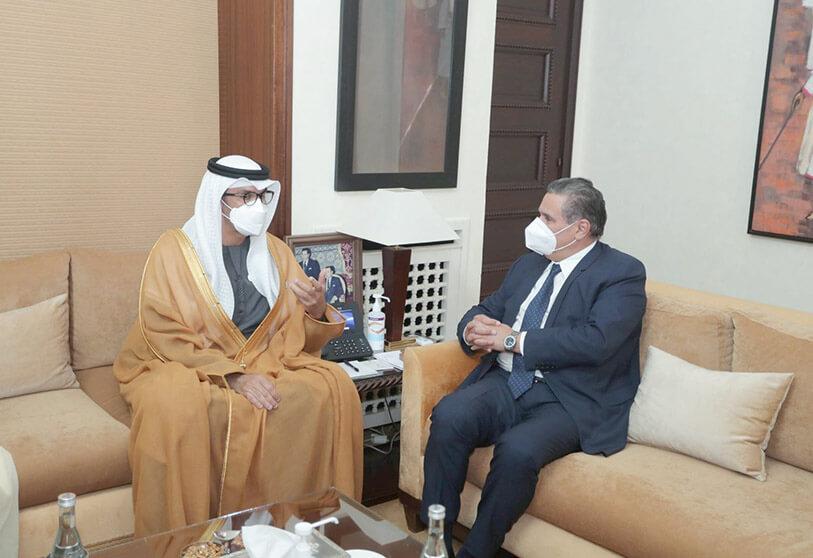 Meetings in Rabat saw discussions on how to further cooperation between the two countries.

Prime Minister of Morocco, Aziz Akhannouch met with Dr. Sultan bin Ahmed al-Jaber, the UAE’s Minister of Industry and Advanced Technology and the UAE’s Special Envoy for Climate Change, to discuss increased cooperation in a number of economic fields. The UAE was guest of honor at the 15th Energy Conference of the MENA Region, held in Rabat and the event covered the outlook for Morocco’s energy security, the push to increase the use of renewables and the outlook for domestic gas and hydrogen output.

Akhannouch and al-Jaber discussed investment opportunities and how to further improve relations between their countries. Al-Jaber stated that the UAE was seeking investments in traditional and renewable energy and that Morocco was particularly attractive in terms of renewable sources. He also commented that the UAE was seeking further investments in industry, minerals, construction, communication and tourism, real estate and agriculture.

Al-Jaber also met Nasser Bourita, the Moroccan Minister of Foreign Affairs, African Cooperation and Moroccans Abroad. The two discussed local and global issues, and spoke of the need to work together on various levels. Al-Jaber later met Riyad Mezzour, the Moroccan Minister of Industry and Trade where the two spoke about investments in the industrial sector and advanced industries. The two men discussed how to promote trade and industrial bilateral relations and the possibility to carry out joint industrial projects. During their meeting, the two officials agreed to create a joint task force entrusted with exploring avenues of cooperation in industrial development between the two countries. Al-Jaber claimed that mutual investment would result in sustainable economic and social growth within Morocco.

An interest in renewables

The final meeting saw Al-Jaber meet Leila Benali, the Minister of Energy Transition and Sustainable Development. Al-Jaber told the press that Morocco’s efforts to fight climate change are clear to see and were positive for the Moroccan people. He also said that there were opportunities for cooperation in the fields of traditional and renewable energy.